Recent escalation in land prices pushes the guidance values up

Land among all real estate property prices increases at a faster rate than even apartments as well is the opinion of the expert realtors and market watchers. The reasons are many. One of the main reasons for this is that the floor space ratio of land compared to apartments is very high.  This makes the demand of land higher but on the contrary the supply is limited. Thus the land value escalations in most of the cities are higher than the value increments of the built up apartments opines the expert realtors. But what is the range of the escalation of values in the last year? We have a city wise analysis below.

In Delhi and the NCR region the price escalation from all the four corners of the city was in the mean range of 13.5 percent.

In Mumbai the mean price increment as noted in the table in the four directions of the city was in the range of 26.875 percent which is quite high.

In Bengaluru, the IT capital of India, the price escalations in the North, East, South and West of the city has a mean increment of 19 percent which is also quite high.
If we look at the situation of Pune the table below shows the price increment of land in different areas of the city
.

According to the table above the price increment of land values in Pune also shows an increment of an average of 30 percent in the last year which is quite high.
Notwithstanding all the data shown above the expert realtors and trend watchers note that there are cycles of real estate and the economy which also has an impact on the increment of land prices. But considering all these factors one concludes that the increment in prices of land is of the order of at least 12 to 14 percent annually with the price doubling in five years.


Increase in Guidance Value owing to increase of Prices in Bengaluru 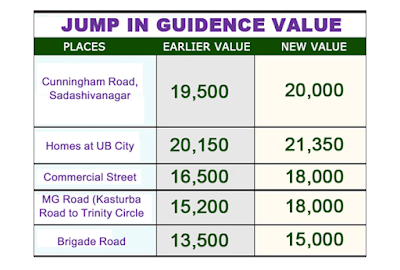 During the last year Bengaluru has noted a huge and a sudden jump in the guidance value of properties in different places of Bengaluru where the myth goes that the return is always above 20 percent on real estate year on year.  Let’s look at the table below which points out that the guidance value is very high in Sadashivnagar. It touches the mark of Rs. 20, 000 per sq. ft. Cunningham Road is also one of the areas where the guidance value is of that range of prices.
UB City is one of the most posh areas of Bengaluru where the revised rate is Rs. 21, 350. Commercial street,Kanakapura Road,MG Road and Brigade Road are few of the areas where the guidance value has also been increased considerably. We see that this increment in guidance value of land has been increased after 15 months owing to increase the amount in the exchequer as there has been a slump in the revenue of the government by 10 to 15 percent this year.

The realtors say that this is perhaps the best time to invest in land especially in cities like Bengaluru, Hyderabad, Pune and Tier II cities also like Ahmedabad as the infrastructure development is at an all-time thigh. There are many suburbs that are being developed in the cities like Bengaluru and Pune with the possibilities of higher rate of return on investment. If you think of the economic cycles also the market watchers and economists opine that this is the ideal time to invest as the market will go to a peak again in the late or middle of 2020’s. Thus the investor will get a quite few years of time to reap the benefit of the period when the prices would be at its peak.
Posted by Unknown at 1:47 AM